I’m not sure I’m a good enough writer to bode a worthy memorial to my friend Tommy Skarlis…I just know life will not be the same without him. I do know–I have had enough raw emotion consume myself since he died that I know I must pen something…so here it goes.

Like many have recited over this past week, we recall the moment he entered our lives. This needs no further explanation, unless you never met Tommy. There are few people who can change an environment when they enter the room, Tommy was one.

In 1997 the In-Fisherman Professional Walleye Trail was visiting Leech Lake for the first time. Tommy stopped by to visit a dock hand from Iowa that was working at the resort my wife and I were co-owners of and my wife managed. Tommy pulled into the harbor in a glitter-filled fiberglass Ranger boat {Fiberglass boats had single digit market share in tournament walleye fishing- 1997} with a swagger and confidence that was frankly offensive yet somehow intriguing. We were introduced, talked walleye fishing, Iowa, family, and he somehow convinced me to convince my wife to make him lunch despite us not have a restaurant that was open for such.

Tommy always made an impression.

Over the next 12 years Tommy and I’s business relationship was solidified and we became close friends. He uprooted and moved to Walker, MN where he and I would launch and execute a number of promotional projects together. He and his wife Michelle would start a family, giving birth to Jake on a night exceeding -25º below zero. Another story for another day I was reminded of this week. 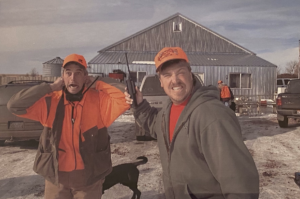 One of my favorites, this photo of Tommy shocking me with the dog collar was during a business partner/VIP Pheasant hunting trip to Prairie Pillow Sportsman’s Lodge, Selby, SD early 2000’s.

Throughout these years we spent an enormous amount of time together. Our aspiring promotional partnership was literally booming as the fishing-outdoor industry was exploding. Things were happening fast–Tommy loved to tell the story about us literally meeting on a Monday morning to review promotional ideas and having it conceptualized, in motion, and fully funded by Friday same week. We worked hard. Countless office hours among even more hours on the water and ice honing our craft. Neither of us had a college education worth toting, we were committed to success and learning on the fly. We did some things right and made a ton of mistakes but it was exactly what we wanted to be doing. We were passionate anglers who desperately wanted to make a difference and hungry to establish ourselves.

Among the thousands of highway miles, air miles, hotel rooms, meals, birthdays, holidays, meetings, seminars, speaking engagements, and impromptu sales pitch’s one factor was clearly evident. Tommy was special. I knew this when I met him on the doc and later verbalized at a fundraising fishing tournament with the MN Wild Hockey Team in about 2001 when Tommy and I did our “bit” on stage that day. Exiting the hotel that evening the Public Relations person for the professional sports team is in the lobby commenting to another while pointing a finger at Tommy boasting—“Him, that’s what I’m talking about…he’s got “IT” “ My internal verbalization was, yes…yes he does.

Few people have “IT”, Tommy did. That unique ability to make a lasting impression regardless of the situation. From meeting people in an elevator to motivating a crowd of thousands on stage, Tommy had the gift. “IT” is hard to describe but you know it if your around “IT”. That rock-star/super-hero persona, that turn the head of everyone in the room when they enter personality. Larger than life at times and emotionally connecting with groups of people at one time. It’s almost as if people are pulled towards “IT” for reasons they love or maybe not. If you were lucky enough to ever be in his vicinity you understand. Maybe you loved it, maybe you loathed it, both reactions existed–both made an impression. Tommy could be polarizing. More than once I thought, OMG–you’re a genius, yet I also quipped a few times OMG–what the hell did you just do, but that was Tommy. Always willing to push himself, take the risk for the moment. He was always un-apologetically Tommy, and that was the gift.

As I ponder his passing in the days he’s been gone I find myself overcome with sadness, an empty feeling knowing that I will never again experience his zest for the moment, his quick wit, his creative vocabulary as he would often make up words. It’s in that moment my tears turn to laughter. I recall the joy he brought to life, his creative, his inspiring fight back from near death after the tree stand accident, his fight to beat glioblastoma, his fishing prowess, his obsession of the outdoors, his unwavering faith and love of family. It’s in all of that which I find comfort. Knowing Tommy did leave an mark. He has impressed upon me, to be better, never give up, hug the ones I love, live in the moment, and above all work each day to strengthen my faith in my higher power, my god, not question the circumstance only to be the best me I can be.

Thank you Tommy, I love you bud…….

On Friday September 18th my friends and I quickly organized a Tribute to Tommy on our social media live event The Pontoon. Guests included: Freshwater Fishing Hall of Fame anglers Gary Parsons, Al Lindner, Ron Lindner, Babe Winkelman, HOF’r and Executive Director of the National Professional Anglers Association Pat Neu along with many more share thoughts and memories of what will be the legacy of Tommy Skarlis. 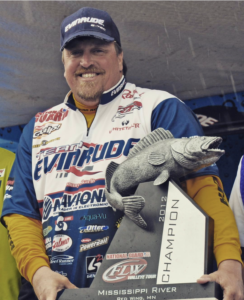 Left to Right- Chip Leer, Jeff Lahr and Tommy Skarlis share a moment of celebration in September 2018 after Jeff and Tommy were once again crowned World Walleye Champions.

Processing...
Thank you! Your subscription has been confirmed. You'll hear from us soon.
Go to Top